Founded more than 120 years ago, The Light Brigade is a historic, Art Deco pub. Located in the heart of Woollahra Paddington, it’s one of Sydney’s favourite watering holes. 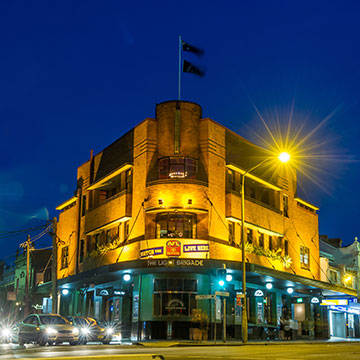 From Past to Present

Fourth-generation Northern Beaches publicans, the Bayfield family, have ventured out into Sydney’s Eastern Suburbs for the first time, taking over the historic Light Brigade Hotel in August, 2015.

The Bayfield Hotel group is a family-run business, established by the late Neville Bayfield, and his sons Wayne and Mark Bayfield. In 2017 the Bayfield family are celebrating their 40th year anniversary since entering the pub game in 1977.

The group boasts an impressive portfolio that includes Dee Why Hotel, Bayfields Liquor Superstore at Dee Why, Bayfields online and most recently, The Light Brigade. They previously owned The Caringbah Hotel, The Belrose Hotel, Newport Mirage and are known most famously for The Newport Arms, which they owned for a remarkable 24 years!

Being a family-run business, family values are always important, with each pub focusing on the community by supporting local sports teams and organisations, as well as being a significant supporter of charitable groups such as the Children’s Cancer Institute Australia, raising over $2.7 million to date. You too can donate here.

Since the Bayfield family took over The Light Brigade, it has undergone a noticeable transition, evolving it into a venue that’s a celebration of Sydney’s vibrant pub scene. What was once a humble pub with a sports bar and restaurant has reached new heights with the launch of a new cocktail lounge in the former iconic pink powder room and a new rooftop bar. The Light Brigade has become a four-level establishment, with something for everyone! 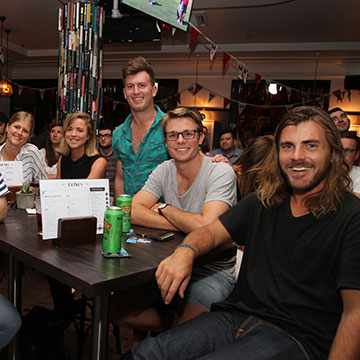 The Light Brigade has something for everyone!

We guarantee you’ll be the envy of every sports’ enthusiast when you watch each major sporting event on our impressive 103-inch plasma or one of the many screens in Brigade Bar.

But we’re so much more than just sport!

From our bistro on level 1, to our chic, intimate cocktail bar on level 2, Brigade Lounge, and to our impressive leafy rooftop terrace, Brigade Rooftop, there’s always a reason to visit us.

Whether you want to woo your special someone on Valentine’s Day, commemorate our great Aussie diggers on Anzac Day, make Mum feel one-in-a-million on Mother’s Day, give Dad a rump to remember on Father’s Day, join the fashionable fillies all frocked up for Autumn and Spring Racing and Melbourne Cup, take your Christmas celebrations to new heights, or simply see in the New Year at one of Sydney’s most original venues, we’ve got you covered.